Rock ‘n Roll is “the only one” for Real J.O.B
Santa Barbara, CA, May 31st – Exactly one year since his encounter with Spiderman and friends in Hollywood for the “Downtown” music video, Real J.O.B reveals a new look, a convincing determination and a highly spirited performance in the music video for the song “I Wanna Rock ‘n Roll” from his latest album titled Exposure.

The pseudo-documentary style music video captures the essence of the artist’s life over the past year as he persists to write and record music and as he aspires to develop the confidence to become an engaging performer.  Similar to the song, which is highly contrasting, the video shows the artist’s sense of self-doubt, and then his growing confidence as he embraces his power to better himself.

The song, which is the centerpiece of the Exposure album, was originally titled “I’ll be Alone.”  The turning point in the video is when the artist is shown re-writing the chorus lyrics from the original low-pitched “I’ll be Alone” to the piercing and dramatically high vocal “I Wanna Rock ‘n Roll!”

The music video, filmed and edited by Cliff Severn, takes the viewer into the artist’s life as he brings the song to life, and in the process develops his own sense of confidence.  In addition to his breakthrough performance, the singer and songwriter is shown sprinting along the beach, doing pushups and pull-ups, creating his image, and practicing his dance moves in his bedroom.

The “I Wanna Rock  ‘n Roll” music video will be released on Wednesday, June 1st @ 8pm and can be viewed on the Real J.O.B website:  http://realjobsb.com

The making of the song “I Wanna Rock ‘n Roll” is a good analogy to the making of my music career. It has been something that came out of a feeling, but was a complete surprise to me (and probably everybody else that knows me).

The song “I Wanna Rock ‘n Roll” was originally called “I’ll be Alone“.  The song is about missing somebody and letting them know that you’ll “be alone” waiting for them.

You can listen to the finished track “I’ll be Alone” here.

About a month after recording the song, I was in the shower trying to figure out how to make the chorus vocal more exciting, when the lyrics “I Want to Rock ‘n Roll” came out, and that was it…!

The soul of the song is still the same, thinking about a person that you really like, but instead of “waiting,” you are now “embracing” life. 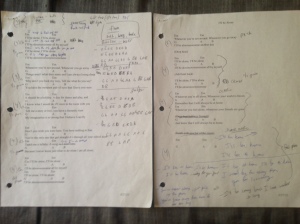 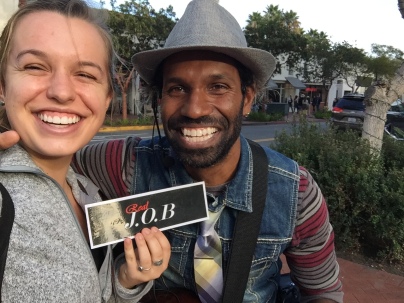 I had a blast getting out and meeting people, playing my songs, promoting my latest album, and playing covers of many classic songs.  This week has been a tremendous learning experience on how to open, be confident, figure out how to interest people, and to actually sell myself and my music.

The picture on the left was taken on my first performance – the location and time wasn’t great to have a captive audience but it was perfect for me to warm up and get my bearings going.  I earned just $2 for the 1.5 hours that I played.  I took a break and then moved to the Paseo location on State Street, which is a great spot, and earned over $20 for another 1.5 hour set.  First day, check!

By the end of the week I was selling a couple of cd’s each session, playing much better, connecting with people around me, and more than doubling my income of the first couple days.  So yes, street performing can be a “real job” for me.  The one thing that I love about it is that it is challenging, I am learning a lot, and I have the ability to experiment and really discover my strengths and how I can best make an impact.

Venues that have been working thus far are the Santa Barbara Pier (there are lots of visitors from around the world) and Paseo on State Street.  For the coming week I will be adding the Camino Real Marketplace in Goleta to my list of venues.  Until next time…!

Hollywood, CA, May 27th – Three years after his infamous Groovin’ music video, Real J.O.B emerged in downtown Hollywood to perform for his upcoming music video. This time completely clothed, the singer and songwriter was, ironically, decently exposed to perform the song “Downtown” from his third album titled Exposure.

Contrasting with the stark loneliness of Groovin’, the Downtown video features Real J.O.B dancing, smiling, and singing with an eclectic cast of characters including Spiderman, Captain America, and Mickey & Minnie Mouse. Johnny Depp even makes a brief appearance in the video.

The song was voted highest by listeners who participated in a music video contest held by Real J.O.B at the end of last year, taking 54% of the vote against the song “I Wanna Rock ‘n Roll”. “Downtown” was described by several listeners as having a “catchy beat”, with one listener quoted as saying “it had great musicality and catchiness with the guitar and trumpet sounds, that’s what won it for me.”

The music video, filmed and edited by Cliff Severn, was initially written and scripted as a short story, but was scrapped at the last minute for a more spontaneous, in the moment production. “After looking as objectively as possible at my last album and music videos, I felt the need to do some soul-searching and re-evaluation of my work,” explained the singer. “I wanted to do something fun and light-hearted, and connect with people on that level.”

The Downtown music video will be published on June 1st and can be viewed on the Real J.O.B website: http://realjobsb.com

Here are results of the vote and raffle.

Downtown was the winning song with 46 out of 84 votes (54%). Thank you for the votes and comments!

Congrats to the following raffle winners:

Which song do you like better?  Place your vote and you’ll be entered in the raffle .  There are eleven prizes including a cash grand prize of $100 (you don’t have to be present to win)!

The winning song will be the used to make an Exposure album-release music video.

Real J.O.B – Comments on “Downtown” vs “I Wanna Rock and Roll”

I’ve been out meeting people to promote the Win $100 raffle, and looking to get as many people to vote for the song they like, “Downtown” or “I Wanna Rock ‘n Roll“.

Currently Downtown has 56% of the vote.

Which song do you like better?  Place your vote and you’ll be entered in the raffle – details at http://realjobsb.com

Here are some comments on the songs:

-Of the 2 songs you posted (Downtown and I Wanna Rock’n Roll) my vote goes to I Wanna Rock ‘n Roll! Good luck and have a great day! -Ko K.

-Both songs are great but I really enjoy “Downtown.” Congrats on the new album! –Alycia L.

-It was a tough decision. I love Downtown as it has a very catchy beat. But I would have to go with I Wanna Rock n Roll. Love your voice in it, the lyrics & the music. It has it all. I can just imagine an awesome video with this song! -Sherry D.

-And the winner is……..Downtown! –Gretchen G

-My favorite song from the album is Downtown. –Scott W.

-I like your song ‘Downtown’. Specially the lyrics. I listened to all the songs and I really like them. You have a very nice voice! –Kristina M.

-I liked listening to your new album, I love that you keep producing. Between the two, I would say I enjoyed the song Downtown on the whole more. It had great musicality and catchiness with the guitar and trumpet sounds, that’s what won it for me. Vocally, I think you sounded better in I Wanna Rock and Roll, but Downtown still takes it for me. -David W.

-Hi, I think the album is great and I personally prefer “I Wanna Rock n’ Roll” for the video!    -T. Jin

-I like “I Wanna Rock and Roll.” Hope you can keep going and never give up your dream, Good luck    –Jeff

-I think “I Wanna Rock n Roll” is better since it melody is cool and gets me excited. I think that it is the symbol of your attitude towards the Rock n Roll music. –Yuan L.

-Both songs are great! But go with “Downtown.” Best of luck!  –Cyrena M.

-Downtown would be my vote for the music video. So many concepts and ideas you can do for the video, and I love the lyrics of the song. –Michael A.

-I liked both, but I think Downtown I liked better. Good luck with everything!  –Keegan P.

-I like Downtown- it’s so catchy! My roommates and I have it on repeat. –Jane K.

-I just listened to both your songs. Downtown was such a great song. I can’t stop listening to it.  –Ramy R.

-Hi, Downtown is my song choice. it’s more of a dance beat is what I preferred over the other, but when I’m not in a dance mood, I’d prefer I Wanna Rock n Roll. –Shally D.

-I think you should do a video to Downtown!!  –Catalina A.

-It was hard for me overcome all of the amazing guitar riffs on “Downtown” so that is the song that I like better! The falsetto is sounding great. Thank you for sharing your music with me.  –Justin L.

-You know my answer:  It is always my favorite “Downtown”.  –Soupitak P.

-Downtown was better. –Eddie A.

-Hey nice songs. I liked “Downtown” a bit more than the other one. Good luck on your new album.  –Danny L.

-I really like both songs actually. “Downtown” has a nice alternative/indie vibe to it, while “I Wanna Rock n Roll” has some classic rock sounds. It was a very, very tough decision to make, but I think “Downtown” has the edge for me. I also think that it might fit better in a music video, since you already have the downtown background noises in it which could work well in certain settings. Hope this helps! Again, it was a very close call.  –Jason G.

-Viv and I vote for ” I Wanna Rock and Roll”! I dig the song and the lyrics. Let me know how it goes. Keep it up. Best wishes! –Hansel C.